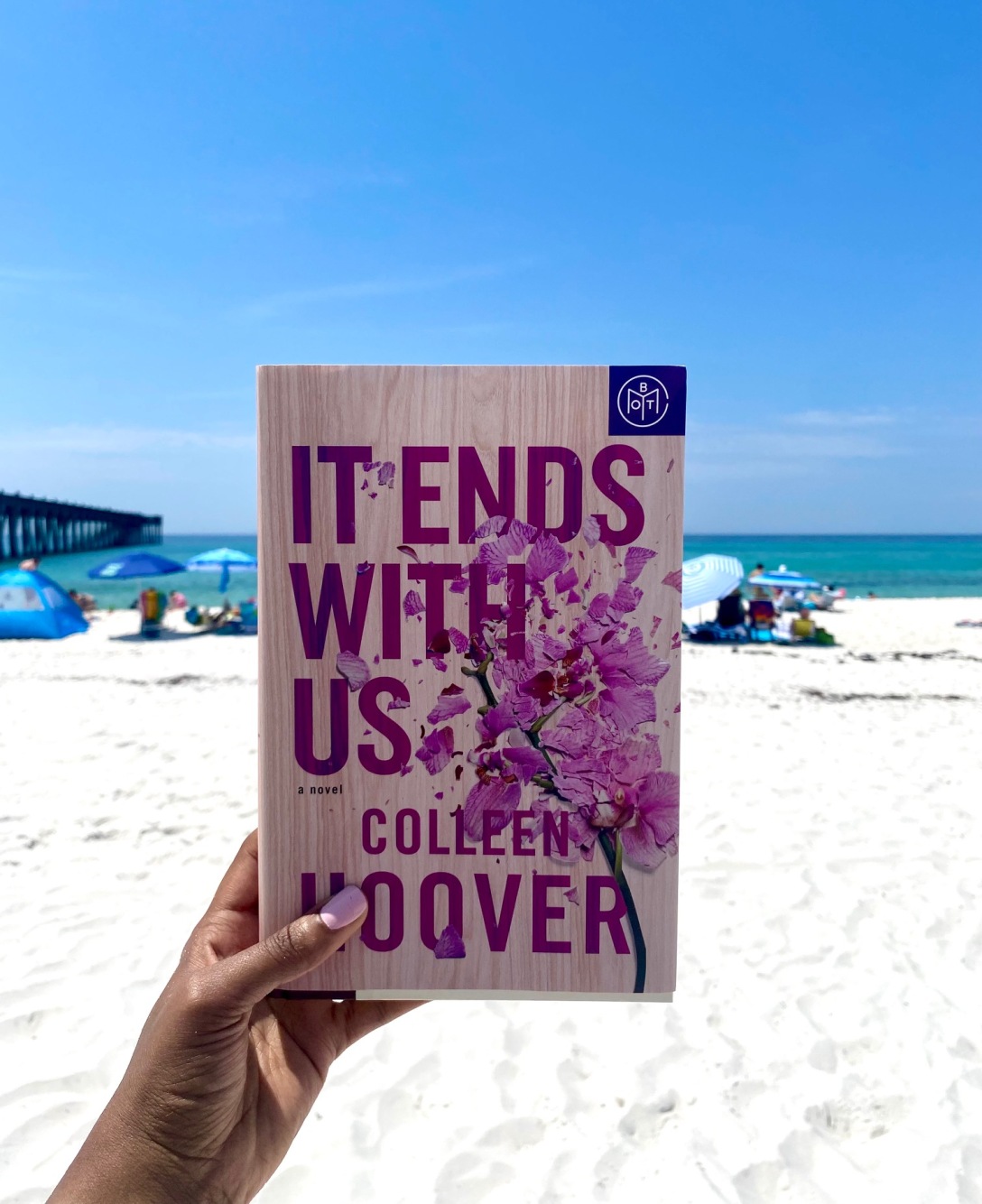 I bought this book as an add-on to my June Book of the Month and was really excited to read it mostly because of the pretty cover art. I read this in three days during my trip to Pensacola, which is the fastest I have read a book in a really long time. Despite having almost 4.5 stars on Goodreads, I’ve got mixed feelings about this one.

Warning: This review has spoilers. Proceed at your own discretion.

The book begins with Lily Bloom straddling the ledge of a random rooftop in Boston. She’s had an emotionally-charged day, giving a eulogy for her father who was abusive towards her mother. While she’s thinking about her eulogy — or lackthereof — an attractive man appears on the rooftop extremely agitated, and he ends up taking his rage out on a chair, not realizing he has an audience. Eventually, he notices Lily’s presence, and they start talking. Lily learns his name is Ryle (a name I found annoying because it was not clear how it was pronounced; I thought it was pronounced like Riley) and that he has no respect for marriage and is only interested in casual sex (of course). He admits to Lily that he finds her attractive and wants to f*ck her (a line I can’t believe she found flattering). They don’t see each other again for a while, and Lily moves on with her life, eventually opening up her own floral shop. She takes on an employee named Alyssa, a bored, rich housewife who just so happens to be Ryle’s sister.

“Sometimes it is the one who loves you who hurts you the most.

“Lily hasn’t always had it easy, but that’s never stopped her from working hard for the life she wants. She’s come a long way from the small town in Maine where she grew up — she graduated from college, moved to Boston, and started her own business. So when she feels a spark with a gorgeous neurosurgeon named Ryle Kincaid, everything in Lily’s life suddenly seems almost too good to be true.

“Ryle is assertive, stubborn, maybe even a little arrogant. He’s also sensitive, brilliant, and has a total soft spot for Lily. And the way he looks in scrubs certainly doesn’t hurt. Lily can’t get him out of her head. But Ryle’s complete aversion to relationships is disturbing. Even as Lily finds herself becoming the exception to his “no dating” rule, she can’t help but wonder what made him that way in the first place.

“As questions about her new relationship overwhelm her, so do thoughts of Atlas Corrigan — her first love and a link to the past she left behind. He was her kindred spirit, her protector. When Atlas suddenly reappears, everything Lily has built with Ryle is threatened.”

Although I liked the idea of this book, I think the author missed the mark on a few things.

Firstly, the plot was fairly predictable. I knew Ryle was not going to turn out to be a good guy from the beginning. The angry chair beating was a foreshadowing of his eventual abuse towards Lily.

Secondly, there are depictions of Lily as a 15-year-old told through her journal entries, and I thought these entries were a little unbelievable. Not that a 15-year-old can’t write well, but I don’t know if I could believe one would write down in detail every single thing that happens like in a book. But I understand that the author was just trying to explain the origin of Atlas and Lily’s love. Atlas was a homeless boy who was a squatter in the home behind Lily’s house. Lily does her best to help him, and they eventually fall in love.

I have an issue with books that depict teenage girls as sexual beings who lose their virginity without any hesitancy or issues. Teenage Lily witnesses some terrible things between her parents including her dad raping her mother (or almost rape), and yet she’s totally fine with having sex for the first time with Atlas. After watching such horrible abuse by her father, I thought teenage Lily would have had at least some reservations before having sex for the first time, even if she really cared about Atlas. With Atlas pushing 19, he decides to have sex with Lily on her 16th birthday, and this did not sit well with me. It ruined his entire character in my opinion. Since he was supposed to always look out for Lily, I don’t think he would have easily had sex with her so easily and then leave her.

Thirdly, Alyssa’s pregnancy. As it turns out, the real reason she starts working at Lily’s floral shop is because she can’t get pregnant, and she needs a distraction. But suddenly, chapters later, she’s pregnant without any explanation. I was disappointed that this book didn’t touch on some of the hardships couples face trying to get pregnant.

And last but not least, the success of the characters felt unbelievable to me. I ultimately felt that the author could have done a little more research into the restaurant business and neurosurgery to make Atlas and Ryle’s careers more believable. It is one thing to be a talented neurosurgery resident on the rise, but to say that a 31 year old has the “best hands in Boston” is a bit of a stretch. Ryle would have had an attending and a chief of surgery to report to. He also was very well off, and it is not clear whether he grew up wealthy or if it was all due to his career. As far as Atlas goes, owning a restaurant and being the chef are two entirely different skill sets. I had a very hard time believing he was in the military for 8 years and then had the money to open a successful restaurant and be the chef at the same time, especially after coming from nothing.

Lily’s success also was a bit unexplained. Did she get a large inheritance from her father’s passing to be able to open her floral shop? These are just questions I asked myself throughout the book since the careers served as a backdrop to the story. In my opinion, the characters needed to be at least 10 years older to be so successful in their careers.

I did like the ending though, but ultimately, I’m not sure I would recommend this one. Side note: the sequel to this book entitled “It Starts With Us” comes out in October 2022. I’d be interested to see what the author does with it.